Eating out in Patan 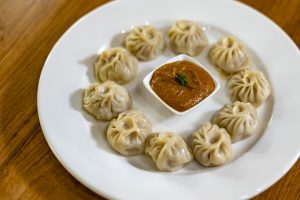 Many people would know Patan as the city of arts, for its alleys and courtyards filled with temples and monasteries. But Patan is also a heaven for the tongues who love to explore the local culinary scenes. From breakfast to snacks to drinks, the same alleys and courtyards filled with temples are also home to the tiny hole in the wall eateries that provide the best local food in town. Here are a few of our favorites:

Besides arts and architecture, Newars, the indigenous community of Kathmandu Valley are also known for their food. Developed over the centuries, Newa cuisine celebrates taste while respecting the body and nature. From full-fledged feasts to snacks, the dishes are an introduction to the culture and lifestyle. Few of the must-try food items includes woh, which is a lentil patty, dyakula, a cooked buffalo meat with soup, chhoela (spicy buffalo meat either steamed or smoked) and aluchhwo, a soup of potato and bamboo shoots among others. Order a glass of thwo, a homemade rice liquor to go with these dishes at Honacha, one of the oldest eateries of Patan.

While Newars are known for their spicy food, their sweets are a different story. Every town has its own confectioners, with the skill passed down on generations. In Patan, it’s the Rajkarnikars who rule the world of confectionary. The two shops located in the alley behind the famous Krishna Mandir are around 100 years old. Belonging to two brothers, who are four-generation confectioners, these shops are well known among both the locals and the regulars. Known for their traditional Newar sweetmeats like lakhamari and balbara, you should also try their jeri-swari and barfi, the sweets migrated from the southern neighbors as you stroll around the city in the morning.

Momo can be deemed as the national food of Nepal. From the small marble shaped momos known as gucha momo or mamacha, to Tibetan momos, one can find a variety of the Nepali dumplings according to the taste of its people. Patan, is especially known for jhol momo, served with tangy soupy dip but at Solu Sherpa Khajaghar, it is the soup momo that sends oneself to food heaven after the first taste, thanks to the Tibetan influence. This eatery serves momo, thukpa and other Tibetan dishes and is a perfect place to warm oneself during a cold winter afternoon.

If you want to explore the Nepali food but don’t have enough time to get out of Patan then Raithane is the place for you. The restaurant’s menu is ever-changing, with seasonal dishes from all across the country, from the southern plains to the northern Himalayas. Besides the Nepali cuisine, they also serve international food with a local twist, either by using Nepali ingredients or techniques. Raithane also organizes cooking events regularly if you are interested in learning about the Nepali food.

Eateries can be found in every hidden alleys and courtyard of Patan. These four mentioned in this blog can be taken as representatives of the food culture. The best way to discover the best food is to explore these stalls with openness and respect to the inhabitants and their lifestyles. But if you want to remain on the safe side, momo and the staple diet of Nepal, dal-bhat-tarkari can be found in the restaurant of Traditional Stay.